At the end of Game-6 Coach Scariolo spoke in a press conference: “Congratulations to Olimpia, team and staff. From our side great pride for a great season. Too bad we finished it not in reserve, with the reserve finished. We struggled against a team built for the Euroleague Final Four. Unfortunately after the great effort of the Eurocup at the nervous level a lot of energy was drained. And in the final we had many players in poor physical condition. Everyone made a maximum effort, to the last bit of energy. It didn’t end the way we wanted, but the season is great. Now there is rest and reflection to continue to grow.
Is Game 1 a regret? The third quarter is.
Calibrated on the Eurocup? We weren’t calibrated to finish, but the brain doesn’t remote control it. We hit the goal great a little hunger wanes, that’s what happened in Milan last year, to say. At the physical level, injuries weigh. The human body machine beyond a certain limit does not go. If it has no more energy it no longer works. And there was no more energy to try.
I thank the fans, a great fellowship was created. Then beautiful basketball played, locker room cohesion, the great work of the staff and the commitment of the players. They tried to overcome their limitations as long as it was possible.
Aftermath of the controversy? Let’s let it go and move on.
Hackett and Shengelia? They helped us out, but we had lost three key players to injury. The two of them as long as they were in good condition gave us a great hand, unfortunately one pulled out in the first game and the other had a brutal flu, five days of high fever. They proved to be excellent professionals and players of character.
The format? I don’t think there is any league in the world with a final seven playing every other day. It applies to both teams, but there would be an overhaul.” 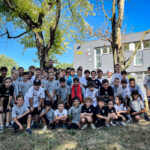 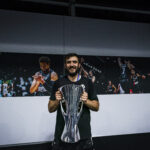 Thanks Tex, best of luck on your new adventure!
30 Jun 2022Jacopo Cavalli

Thank you for everything Amar, we wish you the best!
30 Jun 2022Jacopo Cavalli